Oh hey Rigurd, how are  you doing buddy?

Looks good. So progress has been pretty decent far, been working on some mini boss mechanics that I figure the Players will get a bit of fun out of, and Zeph will be working on their battlers this week. Playtesting has gotten me as far as the final level of the dungeon, so once designing has gotten far enough along, we should be finishing the first round of tests soon. 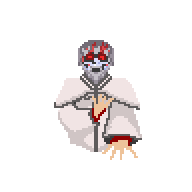 More or less that's about all the progress made, and I promise that I have been keeping my Stellaris addiction in check this week. I hope to have more progress to report next week, stay tuned!