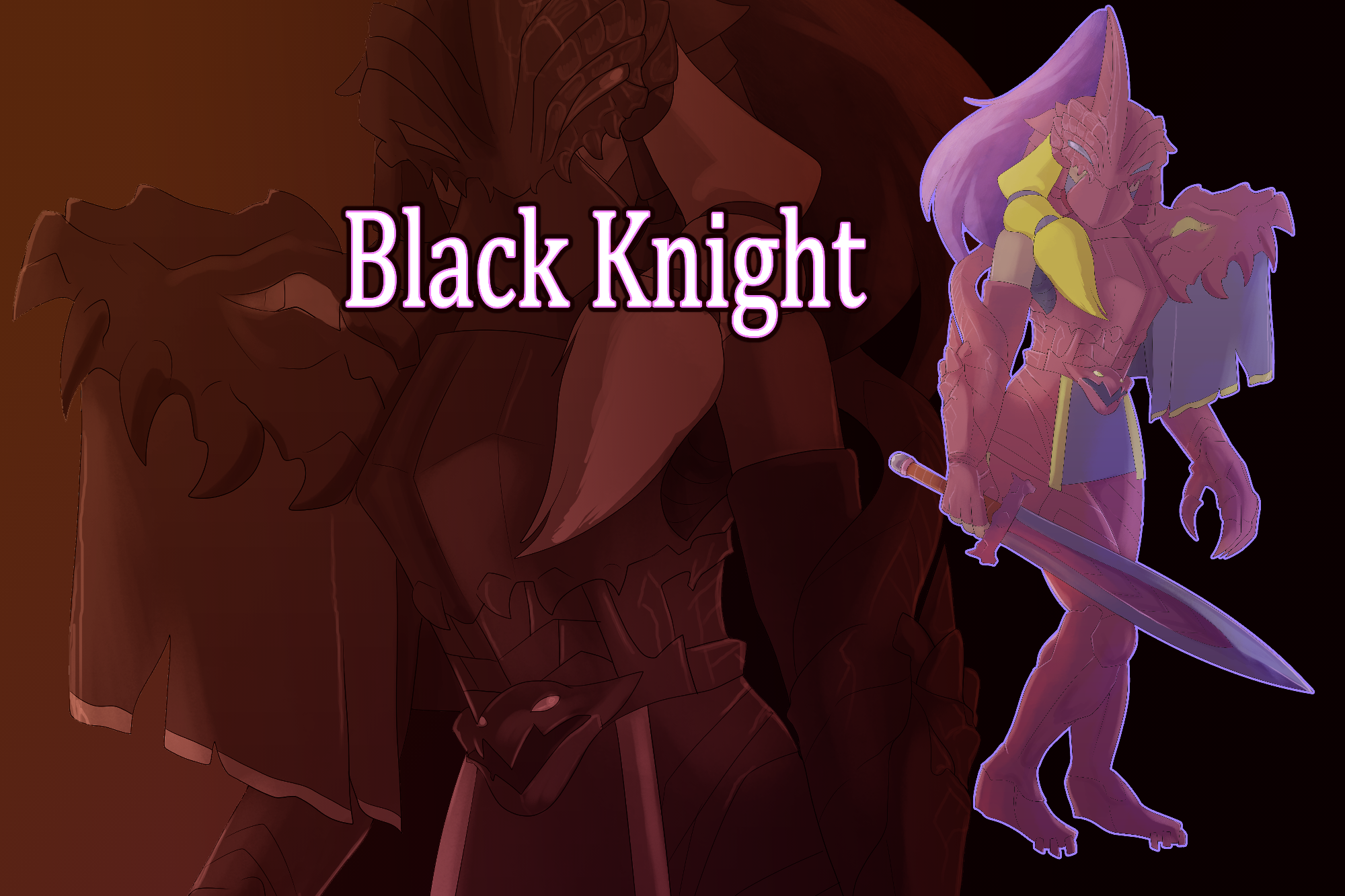 A bringer of suffering, this warrior was once a noble paladin.

Something I've long talked about will finally come to fruition in the upcoming Heart of Corruption update, and that is the Class Promotion system. The very first to be added, today we'll be talking in depth about the new class promotion system and the Black Knight itself.

Class Promotion is the act of taking a more basic class, and evolving traits of it into a new form. Some are story driven, while others are done by choice.

An actual Class Promotion in the case of Black Knight is a higher level Class with greater stats and new/improved abilities. Any skills held by a Paladin prior to becoming a Black Knight are replaced with ones more suitable for a Black Knight, so any skills you bought with Skill Points become new ones in an equivalent skill branch of the Black Knight. As stats are dictated by what class you are, the Paladin's stats will be changed to the stats based on the algorithm for the Black Knight.

Class Promotions that you can opt into can usually be acquired through special sidequests or trainers. These will either require the fulfillment of a task or payment in gold and skill points. The latter will be very expensive, as changing to a new class should not be a decision made lightly. What is less clear at present is if characters with preset Class Promotions in their story should be able to gain optional promotions, but those said story promotions may prohibit certain optional ones if they don't fit with the story.

The Black Knight is based loosely on the Paladin's original nature, but focuses on causing damage through outright damage, tick damage, and debuffs. The Black Knight does not care about healing, protecting, or defense, their moves used previously to do so are inverted into more offensive or self healing/defensive abilities. They have far more defense than a Paladin but less options to protect themselves compared to the Fighter, serving as a tank with more damage focus and taunts.

A central role of the Black Knight is to inflict as much harm and suffering as possible, so while their abilities cause substantially more harm than the Paladin, they leave devastating after effects. They also command Sins, the raw primal essence that corrupts beings into demons and devils, able to debilitate their enemies via feelings of doubt, laziness, turn each other against one another through Wrath, and other horrific afflictions. Such derision and cruelty fuels the power of the Black Knight, until finally their most sinister arts are unlocked, allowing them to channel the full unbridled fury of the Abyss.

Like the Paladin before it, the Black Knight will be able to focus on various aspects of its playstyle, focusing on debuffs, damage, or more niche abilities that may lead to further Promotions in the future.

In the despair of a virtuous paladin's heart, questions began to stir. What were they truly fighting for, with such great rampant evil running unchecked? Where is the justice of this world? A dark voice answered, promising to show them the truth of this world. No one could hear her screams, alone in that dark abyss. With tragedy's cruel sting, the final shackle to her blackening heart tore free, and let the evil inside. Soon, fell armor grew of her sinew and bone, completing the metamorphosis of that paladin into one of the world's most feared warriors, a champion of the Abyss and its unknowable master, the Black Knight.