Being upfront, this week was abysmally slow. This devlog not coming out til Sunday proves that point. And honestly, there isn't much to talk about.

We've completely a major story character sprite that was really complex but vital to this story, which ate up the entire week to animate. After that, on Devlog Day, we had nothing else done aside from the background work that Zeph does on battlers and story art, and I'm not in a good place to share artwork from her yet. Spoilers and all.

We were in the past few days, able to return to story stuff, adding in the introduction of the dungeon story with two characters, one of which was the sprite holding us up, and we're now working on getting story beats belted out. There's still some hard questions about how certain things will play out I'm resolving in my head, but I've got a general idea by this point. 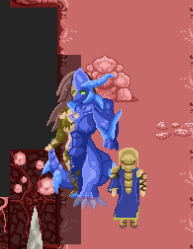 This is the sprite that caused so much trouble, I won't say much here, but a character whose appearance changes heavily based on their angle is incredibly hard to get right at times. But we got it done, that's what matters.

Here's a rough of the story introduction for this dungeon:

The dungeon is getting a lot farther into development now so I want to explain my plan for it.

This will not be a minor update, by any stretch. I am going to add custom sprites for all of the present party members, the tileset speaks for itself at this point, and many new enemies will be added to the game, some used in Sacred Valley itself. I also want to start developing facesets for some of the characters relevant to the story. There will be some other stuff but that’s a secret for now.