This week, I've gotten a good number of enemy sprites knocked out, the bulk of the work done this week. I have a good couple left to do to really populate the dungeon but we’re getting close to being done with enemy sprites and hopefully we can get into some of the last parts of the dungeon dev soon. 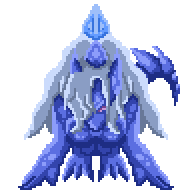 These enemies will be found as substantially powerful Enemies in the later parts of the dungeon and the Sacred Valley as a whole. I haven’t started working on the male Ice Demon, but I will be getting to it eventually. I will likely use the female as a template for the sake of saving time.

Gazers are the enemies found in the late beginning segment of the dungeon, and act as a supporter for the other enemies. They themselves are not powerful but if left alive can cause immense trouble for the party.

A blind enemy, it has immense damage potential, but low accuracy. Should it be paired with a Gazer, the Gazer will lend it vision, allowing a very dangerous enemy the chance to cause vicious damage.

Thralls are corrupted humans that have been so degraded by corruption they have lost their basest semblances of humanity. In effect, they are nothing but an immature demon at this point, yet to shed their human shaped cocoon. They are the weakest of the enemies present in the dungeon, but are unstable, capable of evolving into a demon without warning. A Lesser Demon variant of the normal demon types are in progress, to make the enemy types more diverse.

Zephyr is making good progress on the story scenes, I expect that great progress will be made in the next few weeks. Look forward to what we’ve got cooking next week! Until next time guys!