I've gotten less overall done than last week overall but things are still moving well enough. I've been working on several character sprites for the purposes of important story stuff, and I'm reaching the end of that process, though I'll be making new sprites and tiles throughout the following months as I see fit.

To that end, let's show off what we've got.

First up is Mieva and her walking animations. It's honestly little secret that I love this character but I'll reiterate that I love her both personality wise and design wise, and it's always fun to get some mileage out of her. She has some story moments coming up and so she has some relevance to what I'm doing in the first place.

Next is Bismuth and his idle animation. Given that Bismuth is the antagonist responsible for the Sacred Valley and his role being expanded in this dungeon, it's only fitting he gets the sprite remake treatment. He will have a separate walking animation. 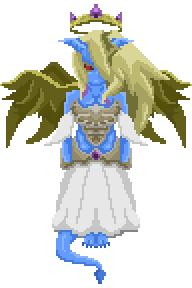 This graphic is more of a spontaneous interest, I wanted to depict Polaris, the devil form of Mieva and at least have a base graphic for when I'm ready to expand on that storyline later. It took a lot of hard work but I'm happy with the end result.

Next up is Teresa the Silver, a new NPC that has substantial significance tot he story of the dungeon. As you delve deeper into the dungeon, you'll learn about her backstory and her ultimate fate.

Last up is the design of Caldera, the main antagonist of the Sacred Valley arc. I started her last night and finished the base design this morning. I will be adding walking animations over the next couple days, and then working on Bismuth’s walking animations. That won’t be difficult I feel,  and once that is done I have some more sprites for the story and then story animations to do.

My estimates for development of this dungeon continues to be way off, so I am assuming that we will see a release potentially next month. We’ll have to see as we’re still very early in development.

Hopefully I will have a much larger series of updates to show off come next devlog. Until then, I will see you all next week.