So similar to last week, I don't have the greatest amount of content done, the intensely busy retail schedule is complicating things a bit. That doesn't mean nothing important was done though!

The whole week I have been playtesting the new classes and making adjustments as I went, seeing what I needed to do to make them work. I'm feeling more confident in their design now, so that is one of my major goals for the 1.0.2 update. What remains is a final polish run through the Underworld, making sure its content is ready and interesting, as well as through Hanaru. I also need to induce a proper stability check in those areas and a few systems to make sure no hiccups occur once it is time to export the update.

I'm not expecting to have much issue getting these things done however, so I'm really expecting to get something out this (This week is almost over, so I'm referring to Monday through Friday, not Friday-Sun) or next week. I know that I've said something like that before with regards to the bug update, but ultimately it would be far easier at this point to combine the updates as the 1.0.2 is so close.

I do have some plans for some small 'dungeons' and side content to be added, but don't expect much. 1.0.3 though, as I hinted before, is going to be your really major improvement.

There hasn't really been THAT much, but we do have a few bits to show you, starting off with a bit of a wisp enemy. 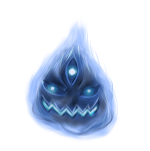 We also have the Leviathan prototype boss battle in the works:

We like to have fun on the Twitch channel while we work on the game, so here's perhaps the highlight of the week in a shellnut.

Watch The Cat Drops In (And Gets Me Killed) from Aodlegacy on www.twitch.tv

Unfortunately beyond that I don't have much for you. Hopefully I will finally have something major to brag about soon.

Also, thanks for the 65 Followers goal being met on Twitch, each and every one of you are awesome. We're going to be hosting another art request stream soonish, I haven't decided the date and I haven't heard from anyone regarding their art requests, so it might be a bit.